Is Trabeculotomy a Procedure of Choice in Primary Congenital Glaucoma? Assessment by Measuring the Change in Intraocular Pressure after the Procedure

Objective: To study the success of Trabeculotomy procedure in Primary Pediatric glaucoma by measuring the change in intraocular pressure (IOP) after procedure.  Study Design: This was prospective, non-comparative, interventional study. Study Period: 18 months from March, 2013 to September, 2014. Material and Methods: This was carried out in the department of Ophthalmology at Allied Hospital/Punjab Medical College, Faisalabad, Pakistan. 24 eyes of 13 patients, from birth to 42 months of age with Primary Congenital Glaucoma (PCG) were included in the study. The patients were selected after a suspicion of pediatric glaucoma from history and clinical examination. The patients were admitted from pediatric eye OPD of Allied Hospital Faisalabad. Examination under general anesthesia was performed and intraocular pressure (IOP) measurements were recorded. Those diagnosed as primary congenital glaucoma underwent trabeculotomy. Post-operative serial examinations within 1st, 3rd and 6th month were performed with recording of IOP measurements. Results:  Twenty four eyesof 13 patients of primary congenital glaucoma were included in this study. 7 patients (53.84%) were males and 6 patients (46.16%) were females. 2 (15.38%) patients had unilateral disease and 11 (84.62%) patients had bilateral disease.  The age of patients ranged from 2 months to 42 months with a mean of 22 months. 18 eyes (75%) were involved in patients  upto 12 months of age, 5 eyes (20.83%) were involved in patients of 13 to 36 months. 1 eye (4.16%) was involved in the patient of 37 months and above age. All patients had raised intraocular pressure than normal age matched children. All underwent trabeculotomy. There was a decrease in intraocular pressure in all eyes immediately after surgery. In 22 eyes IOP remained within normal limit after 6 months of trabeculotomy but in two eyes it started to rise so was declared failed. Conclusion: The success of trabeculotomy procedure can be assessed by Intraocular pressure measurements before and after the procedure.  Ttrabeculotomy has proven to be a safe and effective procedure for control of primary congenital glaucoma. 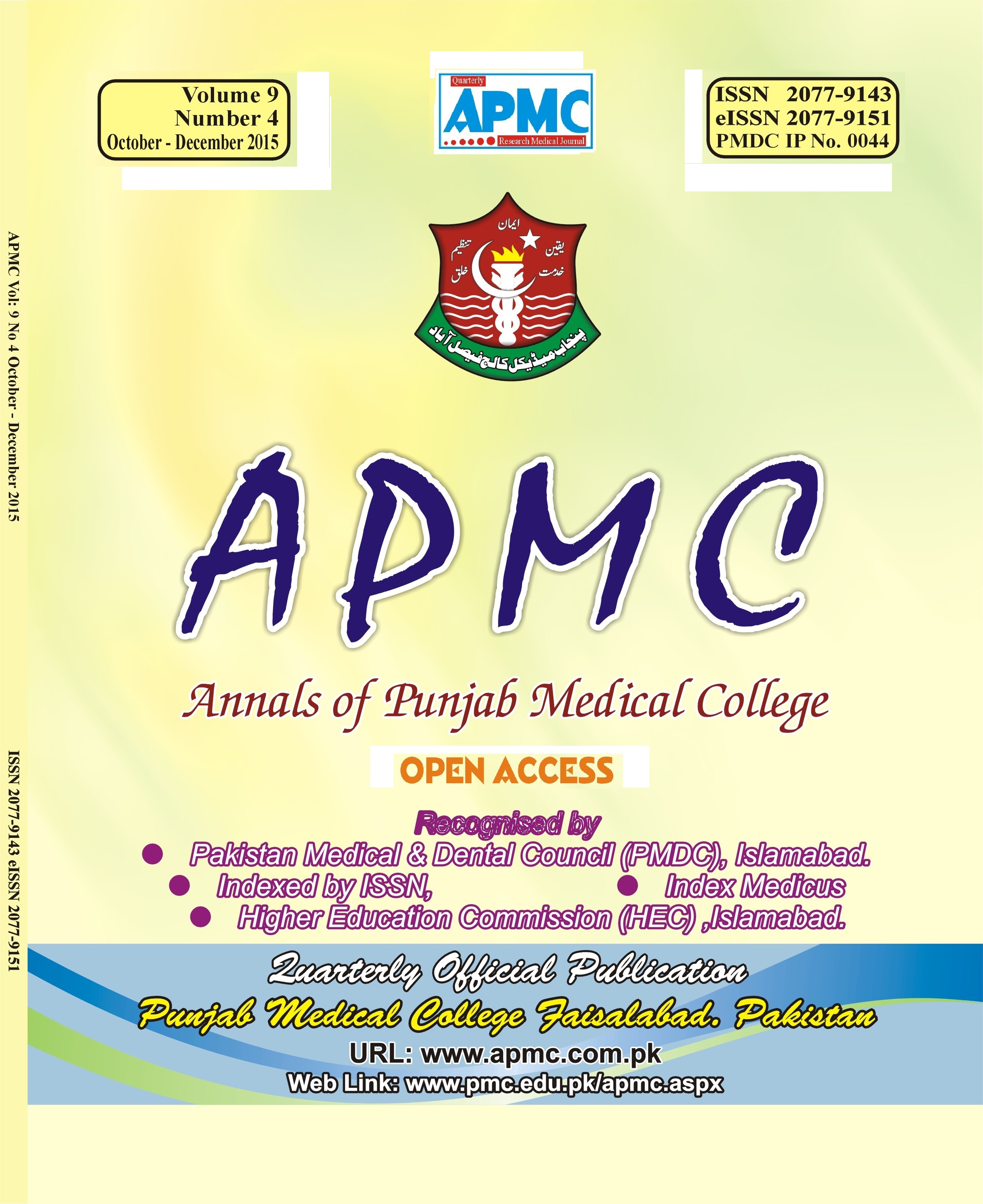 Published
2019-03-31
How to Cite
Syed, S. (2019). Is Trabeculotomy a Procedure of Choice in Primary Congenital Glaucoma? Assessment by Measuring the Change in Intraocular Pressure after the Procedure. Annals of Punjab Medical College (APMC), 9(4), 160-168. https://doi.org/10.29054/apmc/2015.309
Download Citation
Issue
Vol 9 No 4 (2015): Annals of Punjab Medical College
Section
Articles
Make a Submission
Information